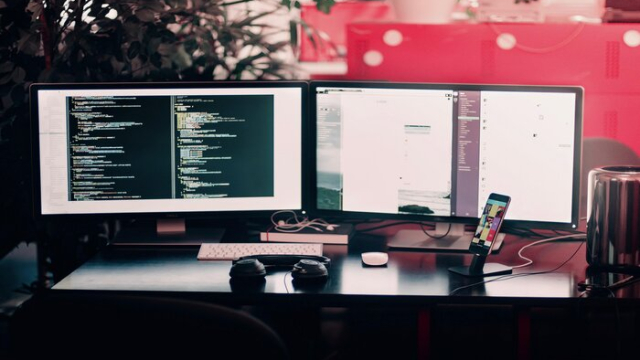 Whether you’re a large enterprise or a start-up looking to create a web presence or a developer exploring web development as a career, you’d be faced with the challenge of selecting the best web development framework for your projects as there are numerous options in the market. Let’s take a look at the most popular web frameworks in the developer community.

Following the “Learn React Once and Write Everywhere” approach, React is a flexible tool to create static and interactive user interfaces. It enables developers to create reusable components that are independent of each other and a Virtual DOM feature. Developers can execute Server Side Routing without updating the whole view each time during an update. React is essentially a JavaScript library for building interfaces and a primary choice for developers for front-end development. It has simple APIs and concepts that can be quickly learned so that web apps can be developed rapidly.

It is a helpful front-end framework for dynamic web apps because of its structural, component-based architecture and perfect for building enterprise-wide web applications. An open-source framework, it’s free to build web apps with top features like MVC pattern, directives, and dependency injection, which can be used to build single-page applications, for which it’s widely used. A time-saving feature is that of immediate synchronisation so that if changes are made in the view data, the model is altered instantly. Its declarative user interface makes it easier to bind components with data models. Client-side work can be done using JavaScript in a clean Model View Controller (MVC) way.

Single-page applications and Progressive web apps can be easily created using Vue.js. It is an HTML-based template with the ability to compile templates into Virtual DOM render functionality, which makes UI development easier. It’s significantly lighter than React and Angular (it’s small in size but still speedy) with features as data binding, computed properties, animation/transition with integrations of third-party animated libraries as well. Besides, it’s easy to learn and integrate with any existing JS apps at the time of adding new features or upgrades.

Spring is suitable for small or large scale web application with rich dev tools to make coding simpler. Its reusable code, Inversion of Control, and a host of structural features can make it an ideal framework for creating middleware, along with Spring MVC, which is a model view controller-based web framework. Spring framework is also an excellent choice for robust backend development (full-stack as well) and includes REST endpoints, SOA and Spring Integration to distributed services and Microservices. Essentially, it’s effective for decoupling your program and altering components along with a host of readymade components to code faster.

Based on React, Gatsby is a speedy front-end framework and static website generator, PWA builder for scalable and secure web apps, with features like serverless rendering to create static HTML at build time and over 2500 plugins. It even has the capability of improving your website’s ranking on search engine optimization. There’s less of a learning curve as it builds on techs like ReactJS, Webpack, GraphQL, modern ES6+ JavaScript and CSS. Its core features are webpack bundling, made in hot reloading, complex patterns for advanced user interfacing, code splitting, and most minor tooling configurations that produce code quickly.

Considered the best Python framework for web development, Django is regarded as one of the most popular among developers to build complex and highly performant websites and web applications. Extensive and well-updated documentation, out of the box libraries, and community support makes Django an exemplary framework for beginners and experts alike. With pre-built components and templates that make prototyping, integration of data analysis, AI/ML easier without needing much customisation or complex configuration. It allows for code to be reused (including a reusable code library) from ongoing or past projects to save time.

A Javascript library that standardizes the interaction between JavaScript code and HTML components, it’s lightweight and allows for massive code reduction in a few lines of code. Its syntax is clean, precise and effective. The framework is known for its ‘one line of code’ style of hundreds of regulations. It’s a frontend framework that is even better than JavaScript at event handling, virtual DOM manipulation and Ajax calls. It is known for its cutting edge feature of DOM querying tools using familiar CSS selector syntax. jQuery helps developers add their custom code, methods and third-party integrations with the help of its simple plug-in architecture.

An open-source PHP framework for developers to avail advanced features, Template Engines for stunning layouts and MVC architecture, Artisan command-line interface (CLI), and customisation through object-relational mapper, all of which are useful in executing complex programming tasks. Its Blade templating engine is lightweight while creating layouts with CSS widgets that load fast, thereby making the user experience more delightful. Its middleware routing capabilities ensure that testing and removing separate queries are simplified to achieve more routes in the app. It too has Artisan Command Line Interface and ready to use components and packages to speed up development.

A JavaScript-based framework is hosted within Node.Js runtime and central libraries across the other critical Node.js frameworks. It can write handlers for requests with different HTTP verbs and a minimal approach to creating robust code within a thin layer of the framework. Equipped with an arsenal of coding tools, building high-grade websites in a record amount of time becomes more manageable.

Due to its code sharing and reuse capabilities, Node.js is viewed as a popular framework for developers. Its remarkable features are asynchronous request handling and its single-threaded nature that makes real-time applications better and faster.

Why Cloud Computing is the future of Enterprise Application Platform?

Advantages of using Docker for Microservices

How Can Custom Enterprise Applications Benefit Your Business?