Docker Benefits for Microservices in 2022 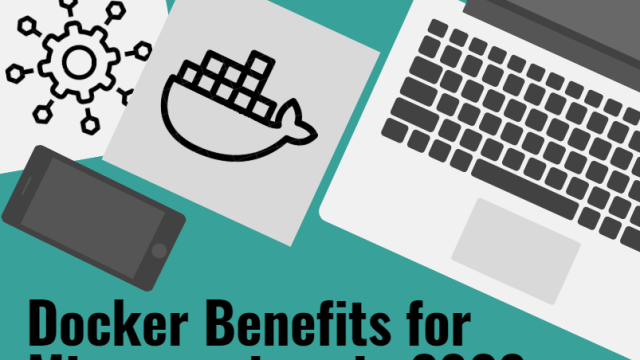 Analyzing how it benefits the modern software development technique- Microservice, it has a lot to tell. In simple words, Docker is the very reason why many companies are moving their base to microservices. However, to understand the process we should gain a decent knowledge of Microservices and Docker.

Microservice is a distinct version of a service-oriented architecture style. It sequences an application as loosely coupled service containers. In another word, it breaks downs the application into different packages. And the services would be fine-grained and the protocols would be lightweight.  It simplifies the complex application development and deployment process. Microservices paved the way to build applications with greater scalability. The independent microservice application packs serve as self-sufficient app containers. And containers provide an independent environment and enable them to pack everything into a Docker file.

Fundamentally, Docker is a tool to ease out application development, deployment, and maintenance. It uses containers to run applications and also called a containerization tool.  Explaining container, it is a standardized package of software comprises of codes and all required dependencies. In addition, Docker is an open-source tool that expands its futures as time goes by, because it has a great community to support behind. It is more suitable for developers and system administers. It gives greater flexibility and manageability for developers regardless of the system environment.

Let’s check the benefits of Docker for Microservices.

Docker offers plenty of features than any other software tool to develop and deploy applications. It eases out the software development process and gives great control in the development. Unlike the monolithic software bundles, Docker simplifies the process with container methodology to develop and deploy software applications. Docker is turning into a  go-to solution for developers and system administers. Also, since microservices join hands with dockers, the demand for docker is skyrocketing regardless of the system environments.

It enables to create the services separately and facilitates to manage each service individually. By its greater possibility to segregate services independently, it paves way for the end of monolithic codes. Today, with docker, developers can divide a complex application into simple separate containers and control it without bothering others.

Further, the benefits of Docker are growing

∙ Docker is an open software with wide community support and it complements best with microservices.

∙ Dockers can be related to virtual machines, but it far lightweight and resource-effective than it.

∙ Docker is a good fit for developing cloud applications for it provides greater uniformity across the process.

∙ Docker helps to integrate applications faster and deploy apps without hassles in any environment.

Docker architecture is comprised of there functional components by which Docker client which facilitates the communication by sending commands. The next is the Docker host platform that executes the prompts from the Docker client. In addition, the Docker registry stores Docker images (Docker images are files that help to implement codes in the container).

However, to orchestrate microservices Docker has another three tools which are Docker Machine which helps you to run the command line. The second one is Docker composer which would be essential where containers support one service case. Also, it enables us to define images and containers. And Docker Swarm enables the developers to perform the process on a broader scale.

Encasing the software in containers that comprise of every resource to run, the software can start to perform on any platform. This is in short what a docker does in software development. And the developers use it to build microservices.

Which means, the different services or functionalities of software can be packed separately as stand-alone applications. And each service container works collaboratively with other containers to form the software completely. Hence, as a containerization tool, Docker offers a lot of functional and maintenance advantage to microservices in a software development and deployment process.

How to Leverage IoT and Mobile App Development?

How to Avoid Risks Associated with Outsourcing Software

What Do You Need To Know About IoT Trends In 2022?